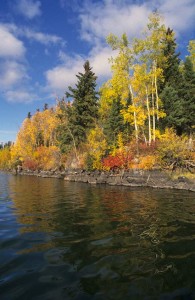 As fall officially arrived late last week, it’s hard to miss the leaves changing colours and the other picturesque signs that come with a new season.

Discover Boating Canada is highlighting some of the most beautiful waterfront destinations in Canada to take in the unbeatable views of fall foliage from a unique vantage point, including right here in Manitoba.

Whiteshell Provincial Park has been singled out by the national public awareness program as a favourite destination for boaters.

“With its stunning lakes and rivers, it’s no wonder Whiteshell Provincial Park is a favourite destination for boaters from near and far,” DBC said of the 2,800 square kilometres of wilderness.

“What better way to spend a crisp fall afternoon than aboard a boat taking in the vibrant colours of the season with your family and friends,” said Tracey Hart, director for Discover Boating Canada. “Canadians have hundreds of scenic waterways across the country to take in the picture perfect fall season. We have put together a list of some of the best spots to view fall foliage from the water — while the colours last.”