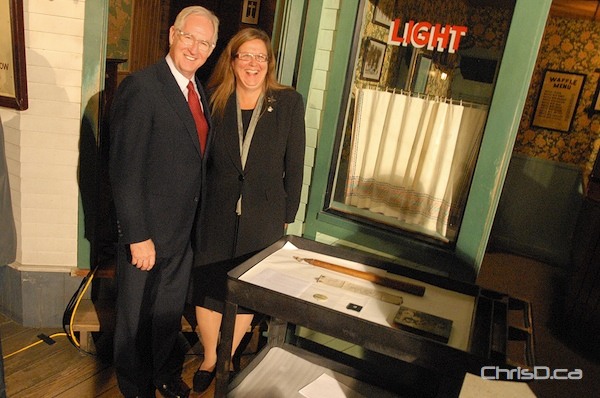 Some of the items from the 1919 Winnipeg General Strike that will be on loan to the Canadian Museum for Human Rights from the Manitoba Museum. (STAN MILOSEVIC / CHRISD.CA)

The Manitoba Museum has teamed up with the Canadian Museum for Human Rights to loan artifacts of the 1919 Winnipeg General Strike.

When the CMHR opens next year, visitors will see a special police armband, a special constable badge, a billy club, a photo plate depicting imprisoned Strike leaders, and a “One Big Union” lapel pin.

The loan is just one part of an agreement signed on Friday for the two museums to collaborate on marketing, educational programs, collections, exhibits and knowledge.

“Together, our museums will create a visitor experience like no other in the world,” CMHR president and CEO Stuart Murray said. “Our unique approaches will strengthen each other for the benefit of this community, promoting both global human rights and Manitoba’s rich cultural heritage.”

The CMHR will also share artifacts with the Manitoba Museum and will work together to develop programs and exhibits. Similar agreements are being sought with Winnipeg’s other major cultural institutions.

“We now have an amazing opportunity to build on a ‘critical mass’ of museological excellence — located mere blocks from each other,” Manitoba Museum CEO Claudette Leclerc said. “Not only is Winnipeg destined to become a national hub for human rights education, it can also become the city of Museum excellence with even more Canadians and tourists being exposed to our world-class interpretation, dioramas and educational programming.”