Embarrassment at IGF as Bombers Fall 53-17 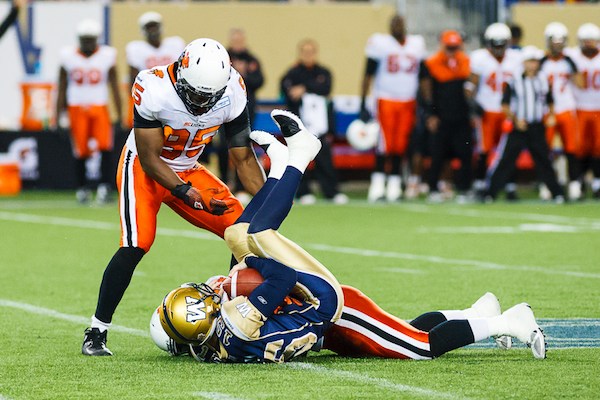 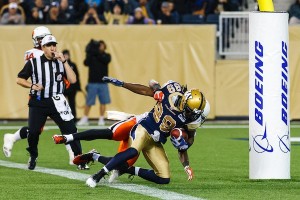 WINNIPEG — Just when fans of the Blue and Gold thought things couldn’t get any worse, they did.

The Winnipeg Blue Bombers decided to put one of the ugliest performances imaginable on display for the announced attendance of 29,457 at Investors Group Field on Friday night, dropping to 2-11 on the season with a 53-17 loss to the B.C. Lions.

The abysmal mess of an offence committed seven total turnovers, translating into 34 points for the Leos, in what has to rank among the all-time marks in the CFL record books. Winnipeg has now given up 146 points off turnovers this year, and have have a league-worst minus-27 turnover ratio this year.

“It’s really, really hard. It’s my sixth year in Winnipeg and it’s probably our hardest season,” said linebacker Pierre-Luc Labbe. “I feel like I’m repeating the exact same thing every week, but, I mean, we owe it to our fans to get a better result on the field. We’re working hard. We’re doing everything we can to improve. We’re staying longer. We’re watching more film. We’re doing all the little things that we need to do to be better. But at the end of the day it’s about wins, and losses.”

Things started off about as bad as Winnipeg could’ve imagined, as quarterback Max Hall’s lateral pass on the game’s opening offensive play was fumbled by running back Will Ford and recovered and returned by Lion’s linebacker Adam Bighill for the major.

In the second half, after Hall was yanked in favour of quarterback Jason Boltus while trailing 33-14, Winnipeg’s fourth quarterback to take a snap this year threw an interception on the first play from scrimmage.

“It’s embarrassing. That’s what it is,” said the most veteran Winnipeg Blue Bomber starter Terrence Edwards. “It’s (not just) the lowest, it’s embarrassing to be a part of what we displayed today. Embarrassing.”

A highlight for some long-suffering Winnipeg fans happened late in the fourth quarter as familiar face Buck Pierce entered the game to widespread roaring cheers as he took control of the Lions’ offence. And even later in the game another former Bombers quarterback, Joey Elliott, took a few snaps.

Winnipeg, still not mathematically eliminated from the playoffs, have five games remaining in the regular season. They travel to Calgary to face the vaunted Stampeders on Saturday, October 5.