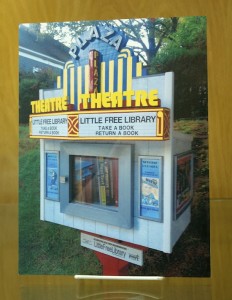 Imagine a handcrafted container in a public space that encourages the love of reading and helps to build community. Such a thing is possible with the Little Free Library movement.

Culture Days, The Winnipeg Public Library, and StorefrontMB have invited local artists to design a little public library. People can vote for their favourite Little Free Library entry at the Millennium Library which showcases the designs of several local designers and describes more about the movement in their showcase wall.

Little Free Libraries started up in Hudson, Wisconsin in 2009. Since then, it has grown as a non-profit organization and over 6,000 have been registered around the world in over 40 countries. For a small fee, registered members receive a plaque with their registration number and a location of their book vessel on the Little Free Library movement’s online worldwide map. The average Little Free Library is about the size of a dollhouse and most are handmade and beautifully detailed.

Winnipeg’s first Little Free Library 273 Mandeville St. just celebrated its first anniversary this past June. Other Little Free Libraries  in the city can be found at 3354 Assiniboine Avenue and 503 Gilmore Avenue. 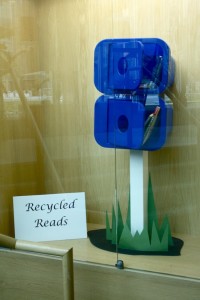 I enjoy architecture inc.’s take on the Little Free Library design, titled Pulp Fiction. The container itself is a simple rectangular cube, or cuboid, made out of an elm tree truck. It allows one to see the books inside through the glass panels surrounding the books on two of the four sides.

I also enjoyed KJ Hildrebrand’s contest entry, Torii Book Library. The ancient Asian structure, the Torii was her inspiration for this piece.

Bios Architecture’s take on the contest is very functional. The plywood structure is not only a library, but operates as a seating space for up to two people. It is also coated with a weatherproofed finish that can face the elements as well as having a sloped design for rain runoff.

The “Peoples’  Choice” for favourite design will be announced on October 31.

I love the idea of being able to take a book, return it, or leave one in its place along with many others who are doing the same. It’s a great addition to any community and helps bring about a feeling of connection.

Eden Ramsay is a Creative Communications student at Red River College. She has a Bachelor of Fine Arts (Honours) from the University of Manitoba and majored in graphic design. She loves culture, design in its many forms, and exploring the world around her. Follow her on Twitter:@EdenRamsay.