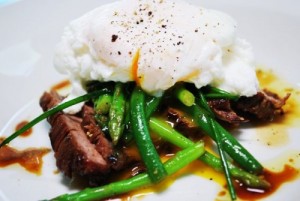 Diners in Manitoba will soon have the nutritional facts of the food they eat at restaurants under a new program launched by the province.

The Manitoba government on Monday announced the Informed Dining program, meant to publicize the nutritional contents of restaurant meals to consumers.

“Just like when choosing food in a grocery store based on the contents listed on the label, families will have information on calories, sodium and other nutrients,” Healthy Living, Seniors and Consumer Affairs Minister Jim Rondeau said. “This will allow them to make informed and healthier choices when eating in a restaurant.”

Participating members of the Canadian Restaurant and Foodservices Association (CRFA) in Manitoba will display the Informed Dining logo and list details about the nutrition contents of their meals.

Currently, Subway and Boston Pizza offer the program in Manitoba, but that will soon expanded to include Dairy Queen, McDonald’s and Tim Hortons. Rondeau said the CRFA and provincial government will be working together to bring more restaurants into the program over the coming months. Restaurants will not have to be members of the CRFA to participate in the program and will be open to any and all restaurants interested.