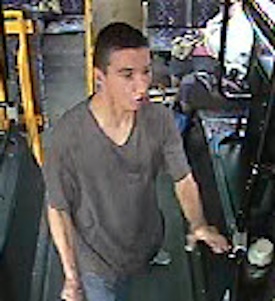 Police are looking for this man in connection with an assault on a Winnipeg Transit driver on September 14, 2013. (WPS HANDOUT)

Police are looking for a man they say assaulted a Winnipeg Transit driver last month.

The incident happened the afternoon of September 14 when police say the suspect boarded a bus in the area of William Avenue near Isabel Street. The man didn’t pay his fare and then demanded a transfer from the 50-year-old male bus driver. The suspect then began assaulting the driver, causing non-life threatening injuries.

After several minutes, two men boarded the bus and attempted to intervene. One of the men was assaulted by the suspect in the process.

Police say the suspect left the bus, but continued in a confrontation with other men nearby.

He’s described as being aboriginal in appearance, approximately 25-years-old with a slim build, short dark hair, and about 6’0″ tall.