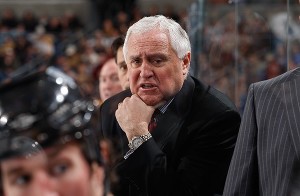 A ceremony tonight at the University of Manitoba will honour hockey great Wayne Fleming.

As announced earlier this week, the Max Bell Centre on the U of M’s Fort Garry campus will be renamed as the Wayne Fleming Arena.

The official unveiling of the name will occur during the Manitoba Bison men’s hockey season home opener against the Alberta Golden Bears at 7 p.m.

A native of Snow Lake, Manitoba, Fleming played four years for the Bisons in the 1970s. He eventually went on to begin his coaching career with the Bisons and acted as assisted coach for a number of NHL teams. He also served as a head coach for Leksands IF, EV Landshut and Avangard Omsk in Europe, and as both assistant and head coach for Team Canada in international tournaments.

Fleming passed away on March 25, 2013 after his battle with brain cancer. He was 62. His wife, Carolyn, and their four children, will be on hand tonight for the renaming ceremony.

Tickets to the game are available at the door.