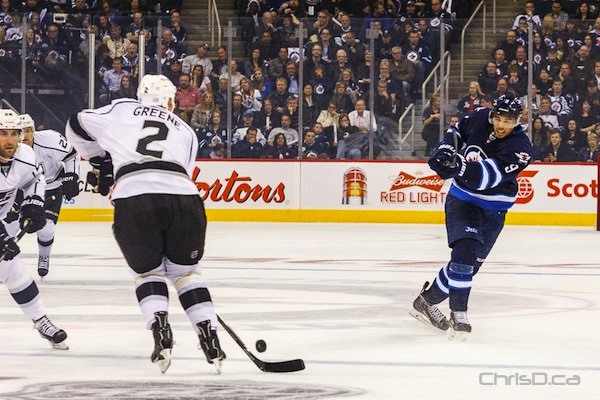 WINNIPEG — When you chase one of the best goaltenders in the world from the game, you know things are clicking offensively.

The newly anointed line of Evander Kane, Devin Setoguchi, and Mark Scheifele accounted for three of Winnipeg’s five goals Friday night as the Jets held off a late third-period surge to edge the L.A. Kings 5-3 in front of a rowdy sell-out crowd at MTS Centre for the club’s home opener.

“(Scheifele) is in the middle with us. He makes good plays defensively, allows us to go offence,” said Setoguchi following his three-point performance. “It’s still early, and yeah, it worked tonight. We’ve had a couple games where we felt good, but there’s still a lot of room for improvement in our game and going forward it’s going to be nice to get familiar with each other. That’s for sure.”

“I think if you enjoy the guys you’re playing with, it makes it even easier,” said Kane of his new linemates. “Obviously me and Seto definitely have some chemistry, and Scheifs has done a really good job of coming in the middle and kind of being part of that trio. So hopefully we can continue to get better and continue to produce.”

Third line centre Olli Jokinen added a goal and an assist, while Ondrej Pavelec stopped 33 shots to capture Winnipeg’s second win of the season to improve to 2-0-0. Bryan Little‘s empty-netter in the final minute was the 101st of his career.

Winnipeg continues their eight-of-nine at home on Sunday as Teemu Selanne and the Anaheim Ducks visit MTS Centre.