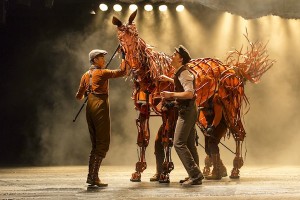 Group tickets to the Tony Award-winning play War Horse are now on sale for its Winnipeg premiere.

Adapted by Nick Stafford and based on the famous Michael Morpurgo book, War Horse will run June 18-22, 2014 at the Centennial Concert Hall.

Performances will run Wednesday through Sunday evenings at 8 p.m., with Saturday and Sunday matinees at 2 p.m. and a Sunday evening performance at 7:30 p.m.