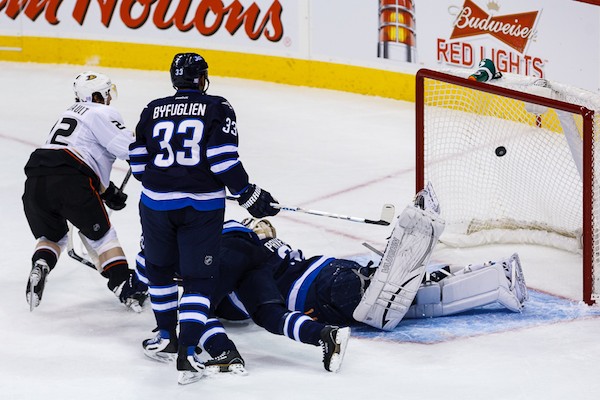 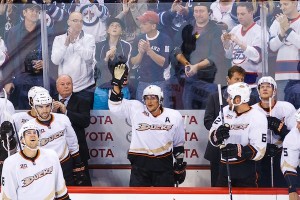 WINNIPEG — Former Winnipeg Jets great Teemu Selanne played what may be his final game in front of his adoring Manitoba fans on Sunday night, as the Anaheim Ducks came back to beat the Winnipeg Jets 3-2 at MTS Centre.

“They’re unbelievable here,” said the 43-year-old after being named the game’s first star, despite not recording a point. “The fans are like their sixth player. Like I said earlier, for me they really make me feel special again.”

From the moment he stepped on the ice for pre-game warmups, 15,004 cheered and roared for “The Finnish Flash” as if it was his mid-1990s glory days all over again.

“In some ways you felt where I was on the home team,” added a chuckling Selanne. “Because the people were so excited… This is a very special building and these fans make this very special, so it’s a good feeling.”

Selanne, now in his 22nd season, was 22 years old when he joined the original incarnation of the Jets in 1992. And his record-shattering rookie campaign has cemented his legacy within this community’s hockey fan base.

“When I was a young boy, I came here, the people and the city and this organization, they really made me feel so special and at home. It was so easy to come here, and obviously if you’re a hockey player in this town you’re a very special person here and the people really show it.”

Anaheim scored the go-ahead goal with 5:31 remaining when Winnipeg defenceman Zach Bogosian fanned on a breakout pass from behind his own net. Former Hart Trophy winner Corey Perry snatched up the giveaway and made no mistake putting it past Jets goaltender Ondrej Pavelec.

Winnipeg’s first loss on the young season drops them to 2-1-0. They now travel to St. Paul, Minnesota on Thursday for a Central Division matchup against the Wild before returning home for a six-game stretch.