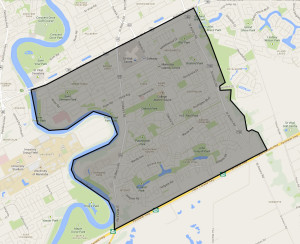 Map of affected area of southeast Winnipeg (click to enlarge)

The city says the advisory is in effect for areas south of Bishop Grandin Boulevard to the Perimeter Highway, and east of the Red River to the Seine River.

Water testing results showed low levels of bacteria in three samples collected in the affected areas on Monday. The area was resampled on Tuesday, and the preliminary test results are expected Wednesday afternoon.

Until further notice, all water should be brought to a rolling boil for at least one minute before it is used for drinking and ice making, preparing beverages (e.g., infant formula), preparing food, and brushing teeth

It is not necessary to boil tap water used for other household purposes, such as laundry or washing dishes. Adults and older children that are able to avoid swallowing the water can wash, bathe, or shower. Young children should be sponge bathed. If boiling is not feasible, an alternate and safe supply of water should be used, such as bottled water.

— With files from the City of Winnipeg