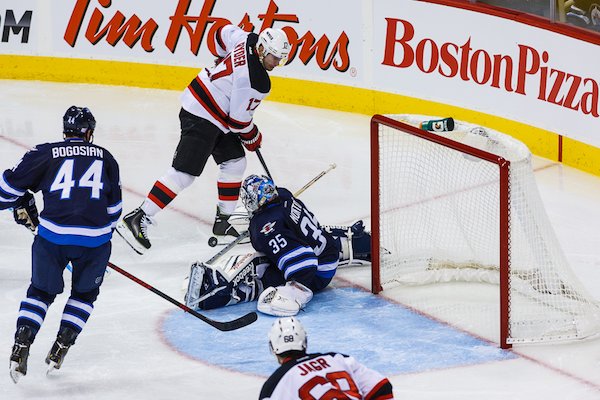 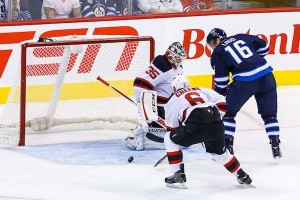 WINNIPEG — Evander Kane led the way for his Winnipeg Jets to snap their three-game losing skid on Sunday night with a 3-0 victory over the New Jersey Devils at MTS Centre.

“I take it upon myself to be one of the leaders in this room and on the ice,” said Kane on the heels of his two-goal night. “Whatever area I feel I need to lead in, whatever the situation is in the game I want to do that and I try to do that as much as I can.”

Kane, among the NHL leaders in hits and shots on goal, racked up his stat line again against the Devils with a team-high five hits and eight shots. He feels physicality contributes to much more than just team presence against their opponent.

“It reiterates our point of us needing to be physical, to be intense, to (apply) pressure all over the ice, and when you do that you see the turnovers that you can create offensively.”

Winnipeg goaltender Al Montoya notched a 24-save shutout in his first start of the season.

“It feels great,” said the Jets backup netminder. “Knowing what we were coming into this game with — a couple losses, it’s not good — so to come out here and get the win, feel good skating the way I was skating, and the team was communicating with me and letting me see the puck. It feels good to come away with the win.”

“(Ondrej Pavelec) is a fantastic goalie,” added Montoya. “For me to come in here and give him a night off, it’s not just about that. It’s about giving this team a chance to win as well.”

Montoya, who was named the game’s first star, was humbled by the Winnipeg fans as he took his post-game curtain call to a rouse of applause from the Jets faithful.

“That’s awesome. I mean, this crowd has been great for us, great for this team since day one. For us to come into this building, beat a team like that, that doesn’t give up much, it’s a huge testament to them for supporting us.”

The 3-3-0 Jets continue their six-game home stand with a Tuesday night dance with the Montreal Canadiens.