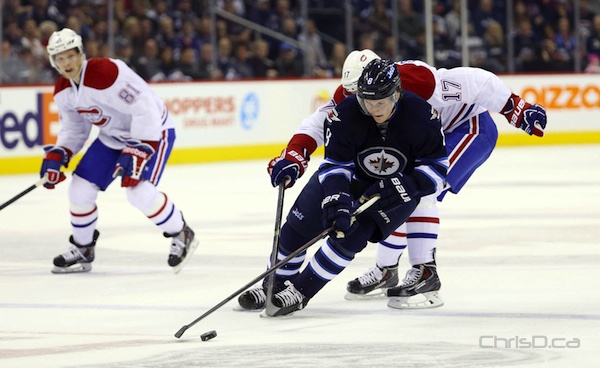 WINNIPEG — Following their morning pre-game skate at MTS Centre, Winnipeg Jets head coach Claude Noel spoke of the need for his team to put forth a full 60-minute effort, play with energy, and have a high battle and compete level.

But his squad failed to execute at all Tuesday night as the Montreal Canadiens wrapped their west coast road swing with a dominant 3-0 victory over the Jets to hand the 3-4-0 club their fourth loss in five games.

“It’s a game we certainly didn’t have much control over,” said the Jets’ bench boss. “Right off the start they were in our zone, pretty much from the faceoff on for the first six minutes, eight minutes. We chased the puck in our zone. They out-shot us, I think it was 8-0 at one point. And (they) got up early.”

It may be hard to fathom, but after losing the opening faceoff Winnipeg failed to even cross centre ice until 2:22 had ticked off the game clock. Their first shot on goal came at nearly the seven-minute mark.

“At the start of the game again we keep digging ourselves a hole, and you have to fight and claw and maybe get outside your game a little bit to get back in it, and that’s not the way we want to play,” said team captain Andrew Ladd. “It’s unfortunate that it takes two goals on their part to get a little desperation in our game… You’ve got to find a way to get that going right off the hop. There’s enough energy in this building to do that — to start the game with the right intentions.”

Montreal goaltender and Canadian Olympic hopeful Carey Price recorded his 20th career shutout with a 36-save performance on Tuesday night, shutting down three Winnipeg power plays while making impressive saves on point-shots through heavy traffic in front of the net.

“We relied on Carey the last two periods and Carey basically won that game for us,”
said Canadiens captain Brian Gionta. “We had a great start. But the second and third we kind of laid back a little too much. They adjusted to us and kind of took it to us.”

The Jets will now gear up for Game 4 of their season-high six-game home stand on Friday night against Central Division-rival St. Louis Blues.