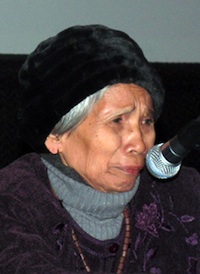 A Philippine survivor of wartime rape and human trafficking is in Winnipeg to share her story with the Canadian Museum for Human Rights.

Lola Fidencia David, 86, was accompanied Thursday by Cristina Lope Rosello, a Filipina therapist who helps former comfort women deal with the trauma of their past.

David was only 14-years-old when she was forced into a Japanese army garrison and repeatedly raped by Japanese soldiers in so-called “comfort stations.” In 2007, she testified at Canada’s House of Commons, which subsequently passed a unanimous motion urging the Japanese government to take full responsibility and offer a formal apology to the estimated 200,000 comfort women of Korea, China, the Philippines and other nations.

“Breaking the silence about human rights violations is essential for healing and growing: for the global community as well as for victims,” CMHR president and CEO Stuart Murray said while at the Winnipeg Chinese and Community Cultural Centre (WCCCC), with members of Winnipeg’s Asian communities.

Rosello’s book, “Disconnect: The Filipino Comfort Women,” traces the human impact of 50 years of post-war silence about girls who were abducted and sexually enslaved by the Japanese military.

“Survivors’ stories must be preserved so younger generations are aware that these kinds of transgressions against women should never be allowed, and that we must be vigilant against modern forms of atrocity against women,” Rosello said.

The CMHR will record interviews with both women, to become part of its collection of human rights oral histories. Public events will take place in Winnipeg tonight and Friday.

The museum is scheduled to open in 2014.