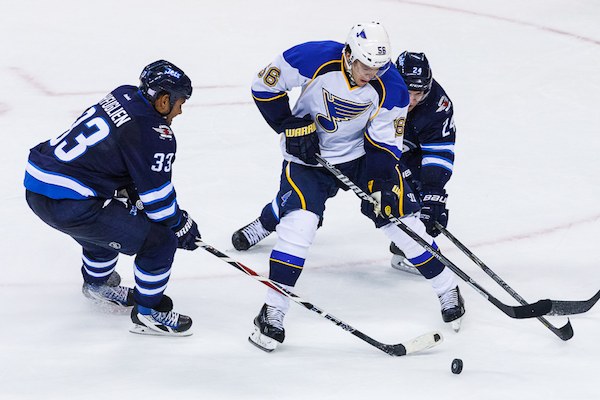 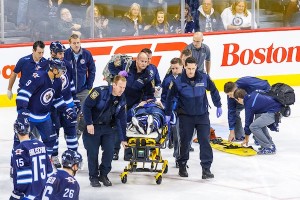 Winnipeg Jets defenceman Jacob Trouba is taken off the ice on a stretcher after crashing head first into the boards on Friday night. (SHAWN COATES / CHRISD.CA)

WINNIPEG — When things looked bleakest, the Winnipeg Jets dug deep. Two goals in the final seven minutes of the third period evened the game, allowing the Jets to squeak out a gutsy 4-3 shootout victory over the St. Louis Blues Friday night at MTS Centre.

“I enjoy (the shootout) when we win,” said Winnipeg forward Bryan Little, whose shootout tally kept his team alive in the third round of the seven-round penalty shot contest to decide the game. “But they are exciting. You could tell, the fans were really into it tonight.”

The Jets improve to 4-4-0 on the young season, bumping them up to fourth place in the seven-team Central Division. They wrap their season-high six-game home stand with matchups against Nashville and Washington on Sunday and Tuesday before heading out on a four-game divisional road swing.

An unfortunate incident occured early in the second period when 19-year-old rookie defenceman Jacob Trouba missed a check on St. Louis defenceman Jordan Leopold behind the Blues net. Trouba’s feet got caught up in Leopold’s, forcing the young defender face-first directly into the boards and snapping his head back. He was placed on a stabilization board, removed from the ice, and taken to hospital by ambulance.

“Trouba is still getting evaluated, but everything is good,” said Winnipeg head coach Claude Noel after the game. “He’s got motion. He’s got everything — is good. I think they’re just running him through some tests, make sure everything is fine.”