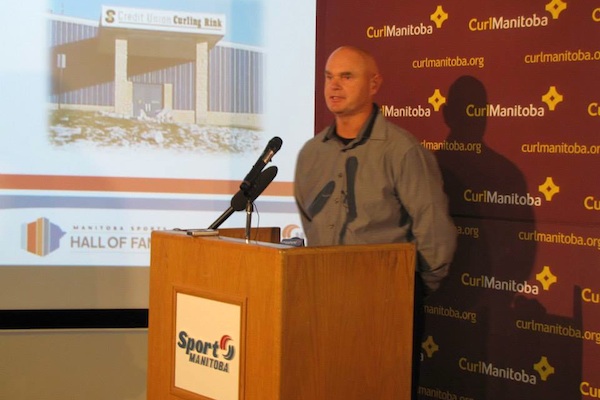 Champion Winnipeg curler Kerry Burtnyk speaks during the opening of ‘The Roaring Game’ exhibit at the Manitoba Sport Hall of Fame. (SPORT MANITOBA)

A display dedicated entirely to curling has opened up at the Manitoba Sport Hall of Fame.

“Manitoba is proud of our curling history and community,” said Jeff Hnatiuk, president and CEO for Sport Manitoba. “Our Hall of Fame is the perfect place to celebrate 125 years of curling successes and to cheer on and inspire future champions.”

The exhibit pays tribute to 73 of Manitoba’s champion curlers, with a look at Mark Nichol’s 2006 Olympic gold medal and Jeff Stoughton’s Brier gold. World trophies and rings will be on display, including Team Laliberte’s Scotties Championship rings.

The Roaring Game will be on display at the Manitoba Sport Hall of Fame (located in the Sport for Life Centre at 145 Pacific Avenue) until January 12, 2014. Admission is $5 for adults and $3 for seniors and children 12 and under.