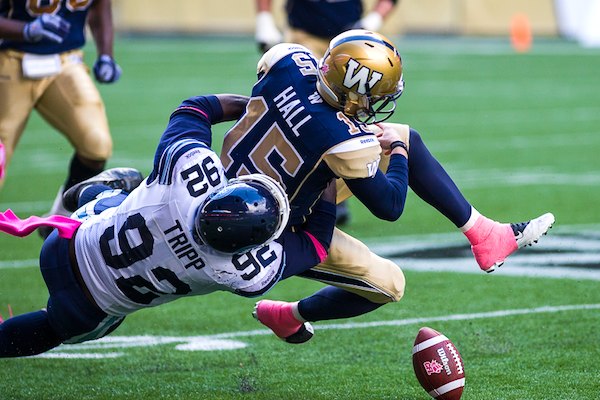 WINNIPEG — Looking for their first back-to-back victories since early in the 2011 season, the Winnipeg Blue Bombers fought back from a 23-3 deficit to make a game of it, but ultimately lost 26-20 to the Toronto Argonauts.

“It’s tough to come back when you’re down like that,” said veteran cornerback Jovon Johnson of his club’s failed attempt to play spoiler for the playoff-bound Argos. “We can’t kill ourselves with penalties and turnovers in the first half. It does come back to haunt you. It’s just one of those things. You know, story of our year.”

The Bombers, now 3-13 with two games yet to play, are now officially eliminated from the CFL playoffs for the fourth time in the last five years — quite the feat in a league where six of the eight teams qualify for the post season every season.

Many members of the now-rebuilding club are taking positives away from Saturday’s game.

“Specials, offence, and defence. Honestly, I just think it was a great game. Honestly, from both sides of the field,” said Winnipeg defensive tackle Bryant Turner. “We’re trying to be professional. We’re doing our job… Our CEO (Wade Miller) came and gave us a speech. We’re playing to win no matter what. Everybody took that to heart, and I think (we) came out and played hard.”

“We had slim hopes but there was still hope,” said Bombers receiver Rory Kohlert of his team’s minute playoff chances coming in. “It sucks to lose. It puts us out of the playoffs now.”

Encouraged by their effort as of late, head coach Tim Burke doesn’t feel the team’s playoff elimination will effect drive or determination.

Winnipeg now travels to Toronto for an immediate rematch against the Argonauts on Thursday. The Bombers wrap their regular season on November 2 with a home date against the Tiger-Cats.