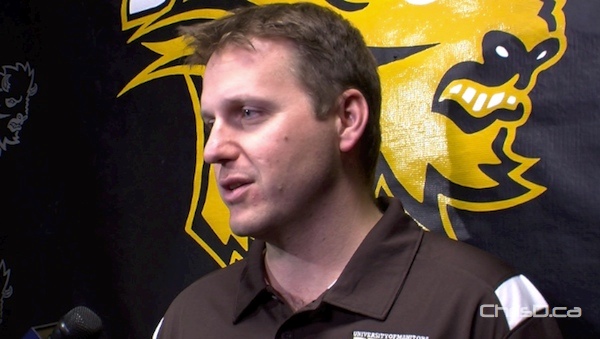 The Manitoba Bison men’s volleyball team has named their co-captains for the 2013-14 season.

Middle hitter Kenny Rooney and outside hitter Kevin Falconer will lead the Bisons on the court, beginning with the team’s season opener against the Winnipeg Wesmen October 24-26.

“The players choose the captains. They are both natural leaders as they set the pace and get the best out of the other teammates on the Bisons with their play and positive attitude,” said interim volleyball head coach Cam Johnson.

Rooney, 19, was named 2012-13 Canada West Rookie of the Year plus earned CIS recognition with his selection to the All-Rookie Team. In his first year at Manitoba, Rooney found his way into the starting lineup despite five fifth year seniors on the roster.

Falconer, 19, starts his second season with the Herd. The Winnipeg native made an impact in a veteran laden squad in the 2012-13 season as he played in 23 of 85 conference sets and added four service aces, two kills, two assists and one dig for Manitoba.

The conference season opens for the Bisons on the road at Winnipeg on Thursday, October 24 at 7:30 p.m. CT as part of the 23rd annual Duckworth Challenge. In addition, the Herd then has their home opener the next night on Friday, October 25 against the Winnipeg Wesmen at 8:15 p.m. held at the Investors Group Athletic Centre (U of Manitoba campus).