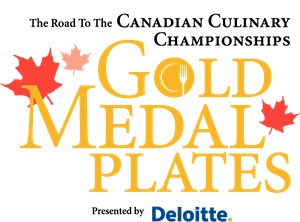 The top eight chefs in Winnipeg will be competing to create an appetizer for over 500 people this Friday.

The Gold Medal Plates event at the RBC Convention Centre Winnipeg will pit the city’s top culinary experts against each other in the ultimate celebration of Canadian excellence in cuisine, wine, sport and entertainment.

Chef Östen Rice of Wasabi Sabi will be among the many judges overseeing the event and won the Golden Medal Plates title last year.

The Winnipeg competition is one of 10 that will be staged in Canadian cities this fall, with the winners from each city competing in the Canadian finals in Kelowna next February.

The rules: Each chef will prepare one appetizer-sized dish for approximately 520 guests. Chefs must select a Canadian wine or beverage to pair with his or her dish and, to ensure a level playing field, chefs must use plates provided by the venue. Chefs will be allowed a maximum of 10 staff members, in addition to two wine pourers per station.

Funds raised from the event will go towards the Canadian Olympic Foundation, which supports athletes and high performance programs such as Own the Podium. Mingling with the guests and enjoying the culinary dishes will be 20 Olympians.