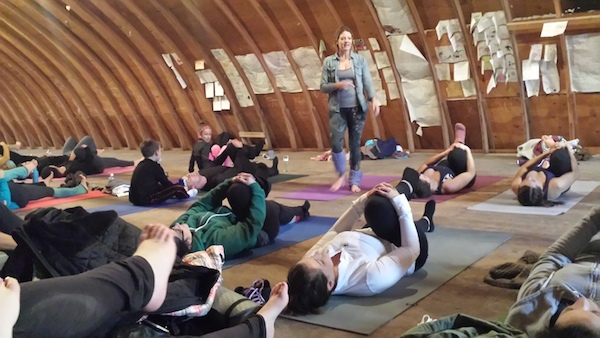 Stretching it out at ‘Heart of Gold,’ presented by Prairie Yogi at Boonstra Farms in Stonewall, Manitoba. (EDEN RAMSAY PHOTO) 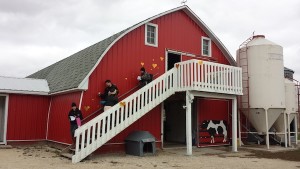 A few weeks ago I was fortunate enough to win two tickets to Prairie Yogi’s Heart of Gold event at the Creative Communications’ Marker Social mixer at LIV in the Exchange.

Prairie Yogi was started up by the entrepreneurial duo of Monique Pantel and Rachelle Taylor, who have known each other since the eighth grade at College Louis Riel in St. Boniface. A couple of CreComm’s themselves, they eventually crossed paths again in Red River College’s Creative Communications program.

For Rachelle’s second year Independent Personal Project (IPP) she created the first print edition of Prairie Yogi Magazine. Monique contributed a story to the project. After graduation, Rachelle wanted to continue on with her project and decided to turn Prairie Yogi Magazine from print to an online platform. They have since expanded the brand into a digital media publication on PraireYogiMagazine.com. They also promote their brand and the practice of yoga through branded events and merchandise. 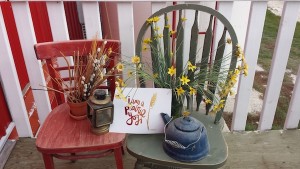 With a month-long introduction pass to Moksha Yoga Kildonan, I’ve been trying to practice yoga on a daily basis. It has been a challenge, yet I keep coming back. I can definitely attest to the health benefits of yoga. Lately, I feel lighter, stronger, and more relaxed.

The Heart of Gold event has been one of the best yoga experiences I’ve had so far. My friend and I made our way to Boonstra Farms in Stonewall, where we followed a path along to a rustic-looking, red barn. We walked up a white staircase to the heated barn’s loft where Liane Charrett from Source Yoga Studios was leading the flow yoga class of about 30 participants. Strung up lights on the ceiling and Kal Barteski’s flowing painted script decorated the barn.

The class was fun, but challenging. We were told to ignite our inner fire by continuously pumping our legs in while in the plank position. We all laughed when attempting the rolling bow pose. The goal for this pose is to lean on one side and roll over while lying on our stomach and holding onto the feet. Participants were encouraged to bring their whole family to the event so a few children of participants were present. It was endearing to watch the children attempt yoga poses and laugh along with us. 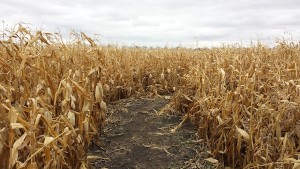 Getting lost in the corn maze (EDEN RAMSAY PHOTO)

After this, we were encouraged to try out a social media scavenger hunt in the Boonstra Farms corn maze. After scoping out a couple nearby haunted houses, and screaming our heads off, we got lost in the corn maze, searching for golden paper hearts. After finding a heart we were told to figure out what yoga pose was being described from the clues provided and take a pictures of ourselves doing the pose. We would then post this picture through social media with the hashtag, #PYheartofgold for the chance to win Prairie Yogi merchandise.

It was easy to feel like a kid again when rolling around the barn loft and running through the corn maze. This event reminded me of how easy it is to get caught up in the day-to-day errands we have to do. These may have to get done, but it is also important to remember our inner child and have some fun.