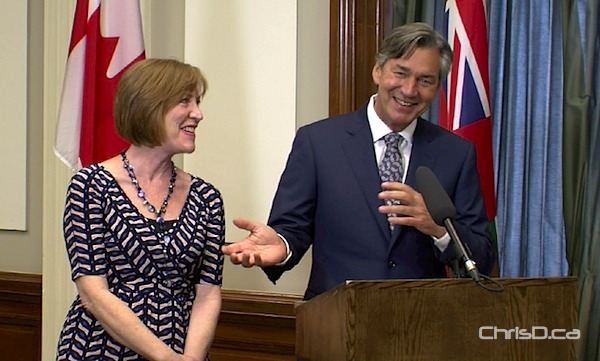 Former Manitoba premier Gary Doer with wife Ginny at the Manitoba legislature in May 2012 for a portrait unveiling. (CHRISD.CA FILE)

Gary Doer, Canada’s ambassador to the U.S. and former Manitoba premier, is returning to Winnipeg for a luncheon on Friday, December 6.

Doer will be the guest at a luncheon hosted by the Canadian Club of Winnipeg at the RBC Convention Centre.

Doer served as Manitoba’s premier from 1999-2009 and assumed his new role as Canada’s 23rd representative to the U.S. the same year.

Tickets are $50 for members of the Canadian Club of Winnipeg and $65 for non-members. For more information, e-mail [email protected], call (204) 799-9086 or visit canadianclubofwinnipeg.ca.