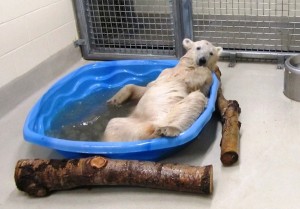 An orphaned polar bear cub arrived at Winnipeg’s Assiniboine Park Zoo on Monday night after being found last week near the Churchill airport.

The 85-pound, 11-month-old cub will be housed at the International Polar Bear Conservation Centre after being acquired as part of a rescue operation with Manitoba Conservation and Water Stewardship.

Zoo officials travelled to Churchill on Sunday and brought the female polar bear cub back to Winnipeg on a Calm Air flight.

“The IPBCC was built for exactly this purpose — to house and transition orphaned polar bear cubs that would otherwise not survive on their own,” said Don Peterkin, chief operations officer for the Assiniboine Park Conservancy. “Obviously we prefer that all polar bears remain in the wild, but we’re happy to say a facility such as this is now available for polar bears where this is their only chance for survival and can provide a new home for this cub.”

The bear will undergo a 30-day quarantine period before being on display to the public.