Cyclocross Championships Coming to The Forks 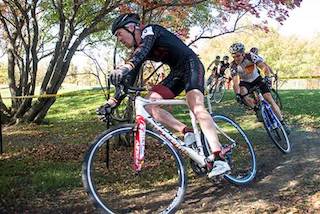 Provincial cyclocross racers will compete at The Forks this weekend in the 2013 Manitoba Cyclocross Championships.

The race will begin Sunday, November 3 on the historic rail bridge, signalling the street of a three-kilometre circuit to the Festival Park area before passing through the heart of The Forks Market Plaza and snaking its way down to the river walk and back up to the Oodena Celebration Circle via the terraced levels.

Organizers say it’s a unique discipline that combines the technical challenges of mountain biking with the speed of road racing.

“Somehow it manages to be extremely demanding and fun at the same time,” said event co-organizer Chris Huebner. “It is also entertaining to watch, with numerous opportunities for spectators to get close to the action.”

Racers can expect a fast, challenging course with variety of different terrains, including grass, gravel, sand, pavement, and cobblestones. Spectators can watch from numerous vantage points along the course.

Race organizers Chris Huebner and Ian Hall are also heading up a team that has submitted a bid to host the Canadian Cyclocross Championships in 2014 and 2015. Should that plan come to fruition, Winnipeg could see the top cycling talent in the country competing in the future.