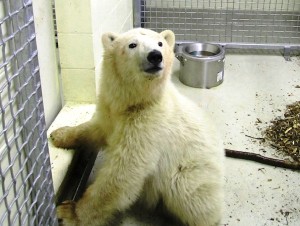 The Assiniboine Park Zoo’s newest polar bear is settling in nicely into her new habitat less than 24 hours after arriving from Churchill.

Zoo officials travelled to the northern Manitoba community on Monday to rescue the female cub after she was found wandering near the airport last week.

Believed to be 11-months-old, the 94-pound cub wouldn’t have otherwise survived on her own. Now that she’s at the International Polar Bear Conservation Centre, the unnamed animal is the third resident bear at the zoo and could eventually be placed into a breeding program.

On Tuesday, officials provided an update on her health and how she happened to be acquired so quickly.

“Cubs of that age are unable to survive on their own without their mother, so it would have perished,” said Dr. Jim Duncan of Manitoba Conservation and Water Stewardship. “Without the centre (IPBCC) here, the options are fairly limited. We have tried in the past to adopt out orphan cubs with a mother and one cub, but those attempts have all failed.”

As part of the 30-day quarantine period, zoo staff will observe the bear and ensure she’s healthy. Besides a few broken teeth and some bumps, the bear is generally in good condition.

The zoo is also looking at a fourth bear from Argentina that could join the others as early as the spring.