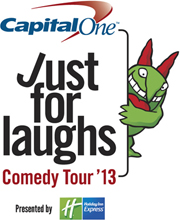 Canadian comedian Jeremy Hotz has been added to the Just For Laughs Comedy Tour lineup in Winnipeg next month at the Burton Cummings Theatre.

Tom Papa has been dropped from the lineup due to scheduling conflicts. See hahaha.com/comedytour for updates.