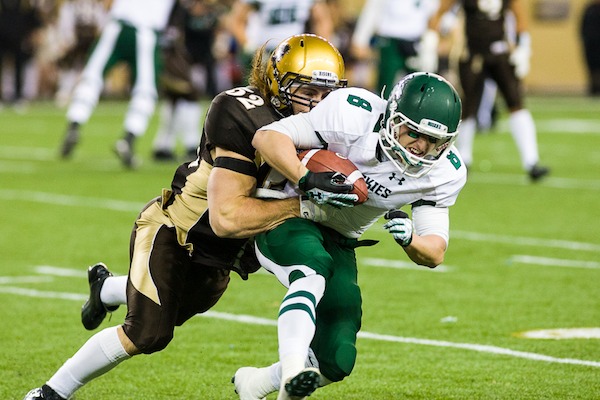 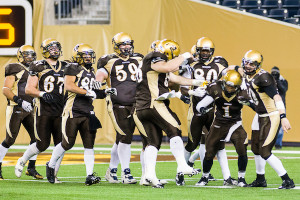 WINNIPEG — In a nail-biter finish, the prairie football rivalry was alive and well Friday night as the Manitoba Bisons squeaked by with a single point to defeat the Saskatchewan Huskies 37-36.

Running back Anthony Coombs opened up game scoring with a 16-yard touchdown in the first, bringing the crowd to their feet on a chilly night at Investors Group Field.

The Bisons went into the half 17-3 over the Huskies with a 29-yard touchdown at the hands of receiver Andrew Smith with a CFL-style pass from quarterback Jordan Yantz.


The Herd would go on to trail 12 points two separate times in the fourth quarter to the Huskies before inching back with the final minutes on the clock. With two seconds left, a botched 44-yard field goal by Saskatchewan gave Manitoba all they needed to win the Hardy Cup semi-final.

“It’s a really emotional dressing room,” head coach Brian Dobie said after the game. “That’s not the Vanier Cup and that’s not the national semi, or anything like that — but I’ll tell you what, that was unquestionably one of the best wins in the 18 years that I’ve been here.

“I don’t know how many people were in the crowd, but every one of them helped at the end. And as our team was coming back, you could feel the lift.”

The Bisons — appearing in their first playoff since the 2007 Vanier Cup — advance to the Canada West Final Hardy Cup to face either the Calgary Dinos or UBC Thunderbirds. Both western teams play on Saturday afternoon to determine the Herd’s opponent. If the Dinos win, the Bisons will travel to Calgary, but if the Thunderbirds are victorious, Manitoba will host next weekend.