City Hall Christmas Tree Being Cut Down on Sunday 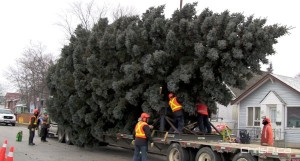 A large tree is placed onto a flatbed trailer from a Transcona home during a previous year’s Christmas tree donation to the city. (CHRISD.CA FILE)

A Christmas tree will rise at City Hall after all this year.

After not being able to find a suitable tree last month, a 42-foot tall Colorado blue spruce has been located at 506 Stalker Bay in North Kildonan.

The estimated 35-year-old tree belongs to Guy Sever, who was more than happy to donate it to City Hall.

“I’ve been thinking about donating the tree for a couple years because it has grown to cover nearly half of our front yard,” Sever said in a release. “It is such a large tree and really part of the neighbourhood, so I also wanted to ask how my neighbours and daughters felt about having it removed.”

The tree will come down on Sunday, November 3 between 9-9:30 a.m. It will then be placed on a flatbed truck and transported to 510 Main Street between 11 a.m. and noon. Over the next several days, the city’s Urban Forestry Branch will decorate the tree with more than 9,000 multi-coloured LED lights.

The ceremonial lighting of the tree will take place on Friday, November 15 at approximately 5:45 p.m.