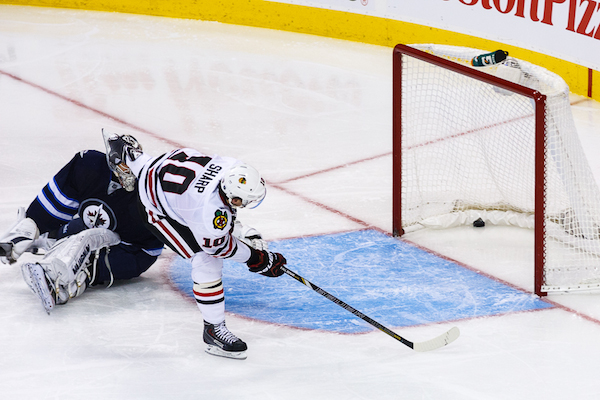 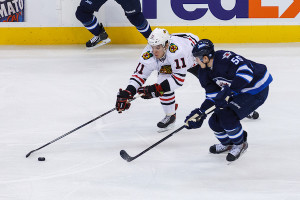 WINNIPEG — Winnipeg’s own Jonathan Toews returned to his home town on Saturday afternoon with the defending Stanley Cup Champion Chicago Blackhawks in tow. And while some may have preferred to see their home town Winnipeg Jets come away with a victory, captain Toews and the defending champs showed exactly why they’ve earned two championship rings in the last four years.

The Blackhawks throttled the Jets 5-1, dropping Winnipeg to 5-8-2 and into last place in the Central Division with their third loss in a row.

“I thought we played really well, and then all of a sudden it was 3-1,” said Jets captain Andrew Ladd. “Then you maybe get outside your game a little bit and try doing things to catch up and dig an even deeper hole.”

Tied 1-1 through 20 minutes, the Blackhawks exploded for three goals in the opening six minutes of the second period to chase goaltender Ondrej Pavelec from the game. Goals from Brandon Bollig, Patrick Sharp, and Nick Leddy, all coming on just four shots against Pavelec in the middle frame put the game out of reach for the overmatched Jets.

“The wind got out of our sails when they scored their third goal,” said Winnipeg head coach Claude Noel, who called a timeout after Sharp’s marker. “I thought that was a play that really killed our team… That was really to me the turning point of the game.”

Toews, meanwhile, had a relatively pedestrian game but was happy to finally play his first regular season game in his home town in front of family and friends.

“It was nice to be home,” said the 25-year-old Chicago captain. “You hear for a long time about the atmosphere. It’s a great building. The fans are really excited and bring a lot of energy to the game. I was definitely looking forward to the game coming in, but I think once the first puck dropped it was just back to business as usual.”

The Jets now host the Detroit Red Wings on Monday before traveling to Chicago for a rematch against the Blackhawks on Wednesday.