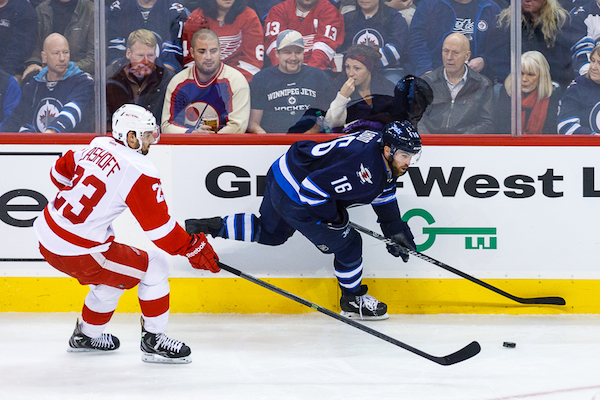 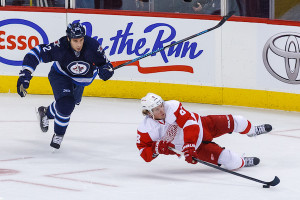 WINNIPEG — The line of Mark Scheifele, Michael Frolik, and Matt Halischuk put together the tying and game-winning goals Monday night as the Winnipeg Jets knocked off the road warrior Detroit Red Wings 4-2 in front of a boisterous MTS Centre crowd.

The club’s first win in four games inches the Jets to 6-8-2 on the young season and ruins what would have been a perfect four-game western road swing for the 9-5-2 Wings, who still boast an impressive 6-3-0 record away from home.

“It was definitely big to get a lot of shots. It’s just a matter — we were playing good D zone and we were supporting each other well, and I think that just leads to good offence,” said Scheifele of his team’s 47 shots on Detroit netminder Jimmy Howard. “We’ve got to stay confident, but we know it’s just one game. One game doesn’t make a season and I think we’ve just got to learn from the good things, fix a few mistakes, and just keep on playing a full 60 minutes.”

Scheifele’s two-assist night began when he threaded a perfect pass through Detroit defenceman Kyle Quincey‘s feet on a three-on-two rush, allowing Michael Frolik to bury a wrister to tie the game 2-2 late in the second period.

“It was a great play,” said Frolik. “I always try to expect those passes, and try always to be ready. It just hit my stick.”

Frolik and Scheifele set up the game-winner early in the third with strong work down low in the Detroit zone, allowing Frolik to find Halischuk alone in front for his first goal as a Winnipeg Jet.

“They’re two great players that see the ice very well,” said Halischuk of his line mates. “I think my role on the line is to try to retrieve pucks and get them pucks, and they’re great at making plays. I think we’re working well together.”

The Jets now travel to Chicago on Wednesday to look for some redemption against Jonathan Toews and a Blackhawks team who had their way with Winnipeg this past Saturday, with the defending Stanley Cup Champions dismantling the Jets 5-1 at MTS Centre.