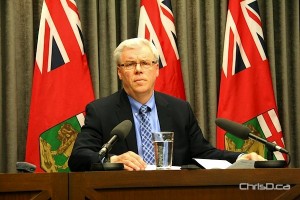 WINNIPEG — Growing the economy and adding jobs is the path Manitoba’s NDP government will maintain as outlined in the throne speech on Tuesday.

Premier Greg Selinger said part of that plan is a five-year, $5.5 billion strategy focusing on infrastructure devoted to the province’s roads and bridges, and flood protection and municipal infrastructure like water and sewer.

“Today, we’ve set an ambitious goal of building the core infrastructure that will grow our economy,” Selinger said. “Working with municipalities, industry and workers’ associations, we’re creating good jobs and ensuring Manitobans have the skills they need to do those jobs and build a good life for their family, here at home.”

The major selling point for the province’s controversial one percent PST has been to fund crumbling infrastructure.

As CentrePort nears completion north of the airport, a multi-year reconstruction project of Highway 75 south of Winnipeg will ensure the vital transport route is protected from flood-related closures. Major upgrades will also be made to the Trans-Canada Highway to Ontario to strengthen another critical trade route.

The province is also funding upgrades to the Perimeter Highway system and a new Trans-Canada Highway bypass around Headingley to improve traffic flows and better utilize CentrePort Canada Way.

The province expects thousands of jobs to be created with the hefty infrastructure investment, which also include expanding Winnipeg’s rapid transit southwest corridor to the University of Manitoba, adding an additional lane to the Pembina Highway underpass and improving active transportation.

Education-wise, the Selinger government will also build a new school in north Winnipeg and make a major investment in Frontier Collegiate Institute in Cranberry Portage.

Parents looking for child-care spaces in the province will also find additional room with the creation of more centres.

“We’ve made a lot of progress by focusing on the things that matter most. And with a focus on the basics today, we’ll build for an even brighter tomorrow for Manitoba families.”

Before the NDP government can act on new initiatives, it’s wading through a backlog of 35 bills from last session. The fall sitting of the Manitoba Legislature wraps up December 5. The spring sitting will start in March.