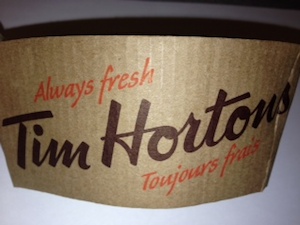 Double-cupping your Double-Double? Not anymore.

Tim Hortons has introduced cardboard sleeves for their cups in an effort to make it easier for customers to hold piping-hot beverages.

Maclean’s reported the addition of the new cup accessory late Friday and the news quickly spread on social media.

The sleeves may already be familiar to some customers who frequently drink tea, but they will now be available for other beverages to anyone who asks.

It’s the latest change for Tim Hortons’ exterior cup image. Late last month, domed lids began making an appearance to replace the often criticized flat versions. A company spokesperson said most stores already have them for lattes, but they can be requested at anytime for regular drinks.