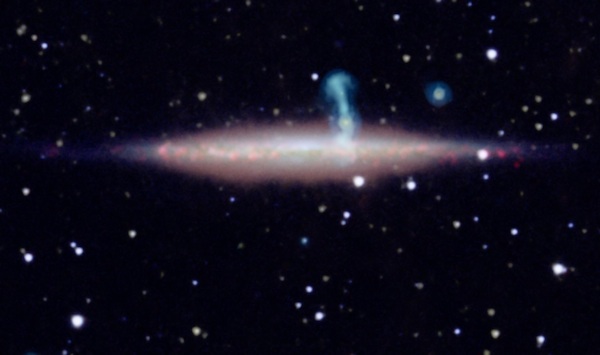 The hidden UGC 10288 galaxy as spotted by a team of astronomers with the help from a University of Manitoba researcher. (HANDOUT)

An international team of astronomers, including one from the University of Manitoba, have discovered a new galaxy.

Research Jayanne English was working alongside her colleagues to study 35 galaxies when they observed one called UGC 10288, a spiral galaxy more than 100 million light-years distant that appears edge-on as seen from Earth.

The images showed that one of their subjects is not a single galaxy, but rather two, nearly perfectly superimposed on the sky to masquerade as one. The discovery allowed them to use the alignment to learn otherwise-unobtainable facts about the nearer galaxy.

“We can use the radio waves from the background galaxy, coming through the nearer one, as a way to measure the properties of the nearer galaxy,” English said, adding that the images taken in 2011 and 2012 were the best ones ever made with radio telescopes.

The unnamed galaxy is not forming stars as rapidly as the astronomers first thought, mostly because of the radio emission in the previous, blended images came from the background galaxy.

← Previous: Musical Acts Revealed for 'Roar of the Rings' Week Next: MPI, Police Cracking Down on Distracted Drivers →
Tags: University of Manitoba | Winnipeg