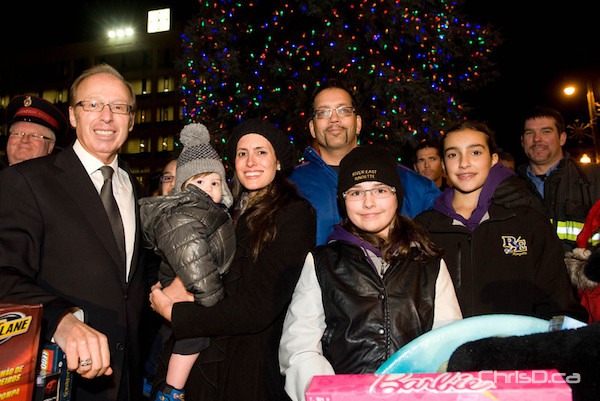 Mayor Sam Katz, with wife Leah (right), along with the Sever family, who donated this year’s City Hall Christmas tree from their North Kildonan yard. The tree was lit during an official ceremony on Friday, November 15, 2013. (TED GRANT / CHRISD.CA) 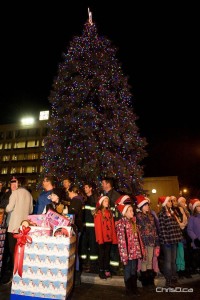 Winnipeg’s City Hall now looks a little more festive after the giant Christmas tree was lit up on Friday night.

Forestry crews then decorated the tree before its big debut by stringing 9,000 LED lights on its branches.

Prior to the approximately 35-year-old tree being lit, Mayor Sam Katz made a presentation to the Salvation Army’s Toy Mountain campaign, while the St. James School Division Choir performed for the large crowd of spectators who turned out.

“The holiday season is about sharing and Winnipeggers are known for their generosity,” Katz said. “Every year, thanks to that generosity and the hard work of the Salvation Army, families in need are given the opportunity to choose something special for their kids from the Toy Mountain. It is a pleasure to once again support this annual campaign.”