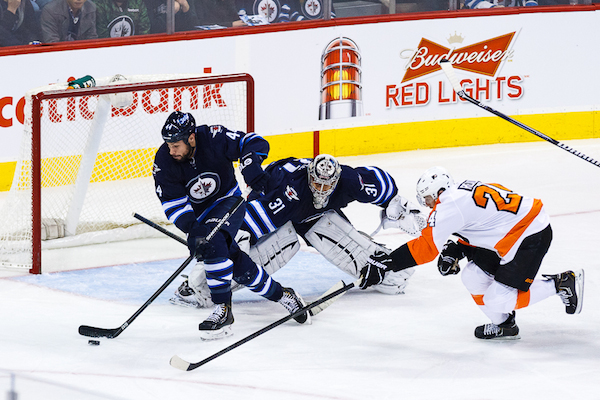 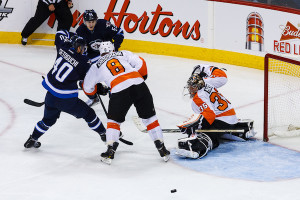 WINNIPEG — Give credit for entertainment where it’s due, they like to make it interesting. The Winnipeg Jets again came from behind, again forced a shootout, and again got the win Friday night over the Philadelphia Flyers, 3-2.

It’s Winnipeg’s fourth win in a row, their third straight shootout win. The Jets move to 10-9-2 with the win, while the Flyers see their three game win streak snapped, falling to 7-11-1.

“I think the big thing for our team was getting it to overtime… feeling confident that we could score and get to overtime,” said Winnipeg head coach Claude Noel. “The game was a well-played game, the two teams played very close… I thought we had some decent rhythm and stayed with it, I like that our team was patient, confident and we managed the game a lot better.”

The Jets got to extra time thanks to a great night (some would call it a “fun” night) from Dustin Byfuglien, who scored both his team’s regulation goals. In the shootout, Brian Little was able to send a wrister stick-side past Steve Mason to seal the win.

“It’s nice [for me] to get it back out there. It’s tough, I haven’t been doing it… and I thought I stuck with it tonight, I was shooting a lot of pucks and trying to figure a way to get it,” said Byfuglien.

Byfuglien “got it” early, at the 5:36 mark of the first period to be specific, as he took a patient Devin Setoguchi pass and slapped it in on the power play to improve a dismal 1-for-48 mark for Winnipeg with the man advantage. An answer came from the Flyers’ Scott Hartnell just 50 seconds after though, as he banked a quick wrap-around off Ondrej Pavelec to tie it up. The Flyers then followed that up with a power play goal of their own, as Wayne Simmonds punched in a rebound in front of the net to put Philadelphia up 2-1 after 20 minutes.

In the following period, the Flyers got stronger on the forecheck and Manitoba’s opportunities dried up.

“In the second, we had it tough breaking out of our zone,” said Noel. “We knew what we wanted to do and how to, but it wasn’t very clean.”

The messy second carried through most of the third, but again it was Byfuglien with an answer — with just five minutes to go and the Jets again on the power play, he slapped a blue-liner past Mason for a dramatic tying goal, adding a little two-step dance at centre ice for emphasis.

“Buff’s Buff,” summed up Noel. “He’s passionate about the game and he’s engaged in our team and the game. [The dancing] brings levity to your team, but you wouldn’t want 20 guys doing that. There’s a place for it, it’s okay and everyone understands that. It’s good when you’ve got some confidence going.”

Overtime solved nothing, but showed the strength of Pavelec, who made several saves to bail out his defence, part of his 38 saves on the night. In the shootout that followed, Little then sealed the win in the fifth round.

Not all was good news, though — Winnipeg’s Zach Bogosian left the game late in the second period, in what was assessed as a lower body injury. No further details were given on his availability for Winnipeg’s next game.

The Jets now take their winning streak on the road momentarily, traveling to Minnesota to take on the Wild Sunday night, before returning to MTS Centre for a three-game home stand starting Monday.