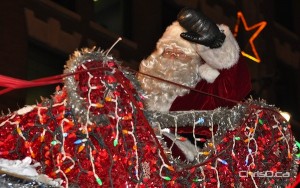 Santa Claus is coming to town early this year, making his annual appearance on Saturday at the Winnipeg Santa Claus Parade.

Santa’s float has been in the spotlight in recent weeks as organizers have been making repairs to the 40-year-old structure, which includes reindeer and other toys.

A campaign by JCI Winnipeg to solicit votes in a contest could potentially award them up to $150,000 for future repairs.

The parade will begin Saturday at 5 p.m. at the corner of Portage Avenue and Young Street, travelling east towards The Forks for fireworks at 7:30 p.m.

Santa’s block parties begin at 4 p.m. along the route with festivities for the entire family.