Jets Go The Distance But Fall to Lowly Flames 5-4 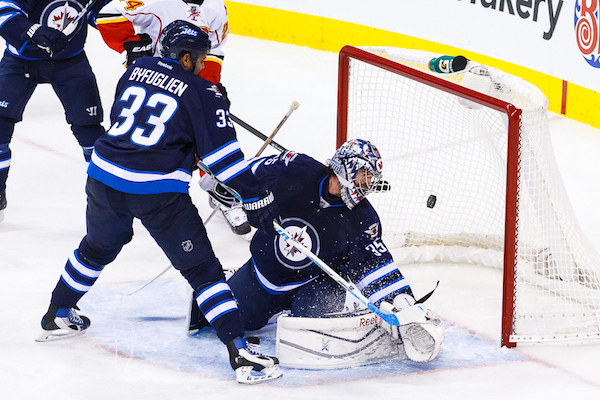 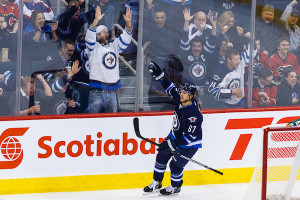 WINNIPEG — The Winnipeg Jets definitely made a game of it, but the struggling Calgary Flames prevailed in the eighth round of the shootout to snap their six-game losing streak with a 5-4 victory on Monday night.

Trailing 4-3 with under four minutes remaining in regulation, the Jets rallied and had the jam-packed MTS Centre erupting as Bryan Little buried the equalizer with 5.6 seconds left on the clock.

“I think it’s a lost point,” said veteran Jets centreman Olli Jokinen, who scored his fourth of the season to tie the game 2-2 in the third. “We were just a little bit too sloppy in our D-zone… it cost us a couple goals. We were able to get a lot of shots, but not enough second and third chances.”

“It seemed like we traded a lot of chances with them and kind of got away from our game plan at times,” said Little, whose late marker that lit the crowd was his team-leading 12th of the season. “We did do some good things, but some of the chances we gave up and the goals we gave up — we gave them point-blank chances. You can only ask Monty (Al Montoya) to bail us out so many times.”

Montoya made 29 saves in his fifth start between the pipes this season, but Winnipeg’s backup falls to 2-2-1 as the Jets starter this year.

Winnipeg’s leading scorer Bryan Little was unable to participate in the shootout after taking a 10-minute misconduct at the end of overtime.

“I didn’t say anything,” explained Little of his encounter with the referee. “It’s the first ten I’ve ever gotten where I didn’t say a word. I just kind of shook my head at him when I was going back to the bench and that was it.”

The Jets have two days off before they wrap their three-game home stand with games against Central Division opponents Chicago on Thursday and Minnesota on Saturday.