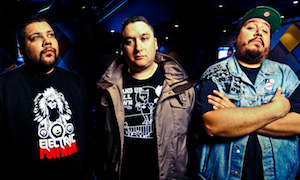 The Ottawa trio — established in 2010 — is made up of two-time Canadian DMC Champion DJ Shub, DJ NDN and DJ Bear Witness.

Tickets to the 18+ show go on sale Friday, November 22 at the Winnipeg Folk Festival Music Store or through Ticketmaster for $20.

The group released their second full-length album, Nation II Nation in Canada, in May. The album was nominated on the shortlist of the Polaris Music Prize as one of the 10 best Canadian album of the year and one 4 APCMAs (Aboriginal Peoples Choice Music Award) for best group, best producer, best album and best cover art.