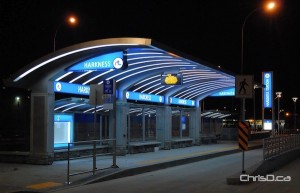 The city and province have finally come to terms with a deal to extend rapid transit into southwest Winnipeg.

The second phase of the project will see both sides contribute $225 million to the construction, which will extend the transitway seven kilometres south to the University of Manitoba. A commitment by the federal government to provide an additional $150 million is still being ironed out.

Under the plan, the Pembina-Jubilee Underpass will also be redeveloped to include additional vehicle and bike lanes.

“The extension of bus rapid transit service to our Fort Garry campus is critical to the future of our university community,” said David Barnard, president and vice-chancellor of the University of Manitoba. “It will provide students, faculty and staff a fast, safe and environmentally sustainable means of getting to the university. It also makes our university more accessible to people who come to our campus for sporting events, concerts, gallery exhibits, public lectures and a variety of other activities that enhance the vibrancy of our city.”

Public consultations are already underway, along with the design and engineering work. Construction is scheduled to be completed by 2019.

The first phase of the project opened in April 2012, taking riders from downtown to as far south as Fort Rouge on the 3.6-kilometre leg.