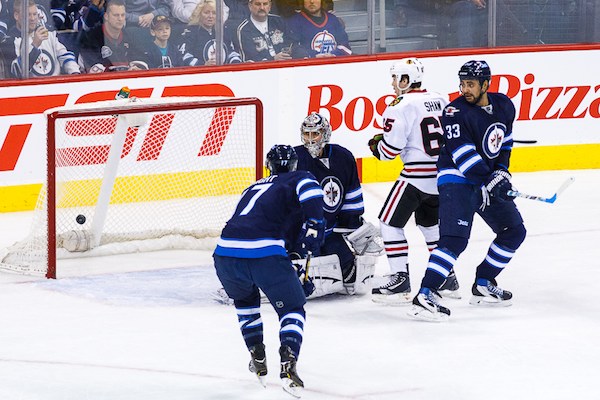 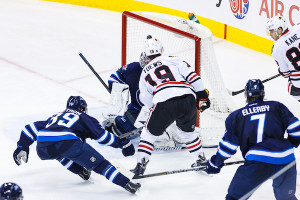 WINNIPEG — Early third-period goals by Marian Hossa and Ben Smith combined with a four-point night by captain Jonathan Toews powered the Chicago Blackhawks to a 6-3 victory over the Winnipeg Jets at MTS Centre Thursday night.

Winnipeg trailed their Central Division rivals 1-0 after the first period, as Patrick Kane scored his 12th goal of the season. The Jets then fell behind 2-0 just three minutes into the second frame, courtesy of a goal by Brandon Saad. 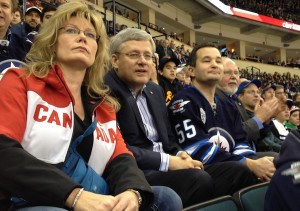 Instead of rolling over at that point, the Jets responded quickly, as forward Andrew Ladd and defenceman Keaton Ellerby scored 29 seconds apart. Toews and Jets defenceman Dustin Byfuglien exchanged goals midway through the second period to leave the teams even at 3-3 following 40 minutes of play. The Hossa and Smith markers, however, did the Jets in, as they never could match the Hawks effort for the remainder of the third period.

“We walk into the third period, we’re tied 3-3. We’re still in the game, we just need to muster up 20 minutes. They stepped it up, we weren’t able to step up,” Jets head coach Claude Noel said.

Patrick Sharp added an empty net goal with 55 seconds left in the game to round out the scoring.

“We started better tonight. We kind of had a second period that resembled a little bit the game in Colorado and Nashville, and I think we responded with a good third,” Blackhawks captain and Winnipeg native Jonathan Toews said.

“Especially protecting that one and two goal lead late in the third. We were playing smart and we realized we have to stay out of the box too. I think we got a little bit into penalty trouble in the second, there.”

The Jets conclude their three-game home stand Saturday afternoon, when they play host to the Minnesota Wild.