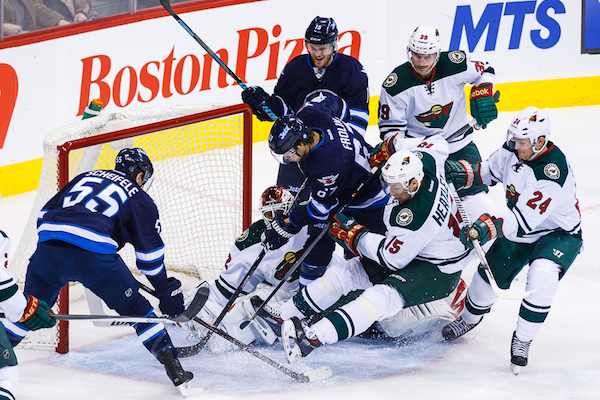 Winnipeg Jets forward Michael Frolik (67) scores against Minnesota despite having a group of players around him in NHL action against the Minnesota Wild at MTS Centre on Saturday, November 23, 2013. (SHAWN COATES / CHRISD.CA) 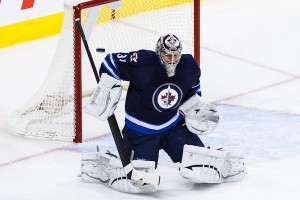 WINNIPEG — The Minnesota Wild showed why they may be the hottest team in the NHL this month as they improved their November record to 9-1-1 with a 3-2 shootout victory over the Winnipeg Jets at MTS Centre on Saturday afternoon.

The Jets, now winless in their last four after a near-fruitless three-game homestand, picked up a single point Saturday but remain in the cellar of the Central Division with 24 points and a 10-11-4 record.

“It’s a tough one. I thought we had control of the game,” said Jets captain Andrew Ladd. “Obviously giving up one on your power play is something you don’t want to happen. We’ll take full responsibility for that.”

Leading 2-1 late in the third and with the man-advantage after Wild defenceman Marco Scandella took a hooking penalty, the Jets caused a turnover. Going the other way on a 2-on-1 were Minnesota’s top two point producers.

Mikko Koivu fed Zach Parise who one-timed it past Ondrej Pavelec for the equalizer with 4:55 remaining in the third.

After a scoreless overtime, Minnesota’s Charlie Coyle deked Pavelec and beat him on the forehand to seal the shootout win in the fourth round.

“It’s not been an easy task. We’ve lost to them 2-1, 2-1, and now 3-2 in a shootout,” said Jets head coach Claude Noel of the three meetings between the two Central Division foes. “We’re close. We’re getting there. We’re close, but it’s the same stuff we’ve talked about before. How do we get this thing to a position where we get it over the top.”

“As you can see, the winning and losing is determined by a fine line for us.”

Winnipeg now heads out on a season-long six-game road trip down the east coast, returning to MTS Centre on December 10.