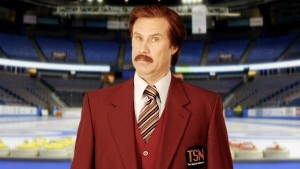 Ron Burgundy will help cover the 2013 Tim Hortons Roar of the Rings for TSN. (BELL MEDIA)

TSN has recruited only the best to help cover the 2013 Tim Hortons Roar of the Rings.

“Marked by the gods of broadcasting and placed into this shimmering green sphere like a golden egg in hay, chosen like an unclean jackal by Noah himself, I accept your hallowed task and sing out with a battle cry worthy of your love and your wisdom,” Burgundy said in a TSN news release.

“And that song is, ‘Winnipeg, get ready to paint the town Burgundy!’”

TSN worked with Paramount Pictures and the Canadian Curling Association to bring Ferrell to the city.

Tim Hortons Roar of the Rings — held December 1-8 at MTS Centre — will determine which team will represent Canada at the Sochi 2014 Winter Olympic Games.

“Anchorman 2: The Legend Continues” opens in theatres on December 20.