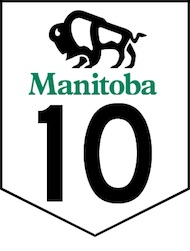 Highway 10 from Riding Mountain National Park to the U.S. border is set to see significant upgrades.

Premier Greg Selinger made the infrastructure announcement Thursday while in Brandon — a move fully supported by the Association of Manitoba Municipalities.

“We know we need good core infrastructure to fuel steady growth in our rural economies that leads to good jobs at home for our young people,” Selinger said. “Upgrades to this highway are part of our long-term commitment to invest in roads and bridges across Manitoba.”

CAA Manitoba also applauded the investment, saying their members have told them Highway 10 was unacceptable. The roadway has also been on their Manitoba’s Worst Roads list the last two years.

“While sections of Highway 10 have been tackled in recent years, during our campaign, people said it still wasn’t enough,” said CAA Manitoba president and CEO Mike Mager. “They said the road wasn’t just uncomfortable to drive; they said it was downright dangerous.”

Selinger also announced the province will work with the Brandon to rebuild the Daly Overpass to ease congestion and improve safety on 18th Street.