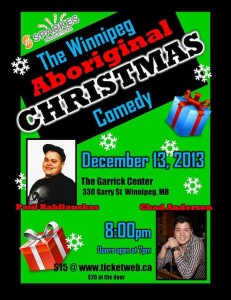 Held Friday, December 13 at the Garrick Centre, the night will be hosted by Chantal Marostica — known as “Chanty” on the local comedy scene.

Rabliausakas and Anderson are veteran Winnipeg comics and know how to cater to all senses of humour.

Tickets are $15 through Ticketweb.ca. A limited number of tickets will be sold at the door for $20.