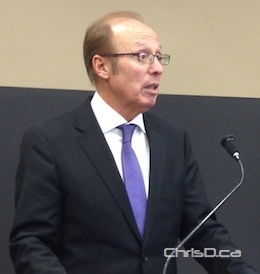 Winnipeg homeowners can expect to pay 2.95% more in property taxes next year.

The city’s annual budget was released Friday, revealing that most of the tax collected will go towards funding crumbling infrastructure. The increase will generate an additional $13.3 million in revenue for the city and works out to be about $45 more per year on a home valued at $263,000.

“The city has many options to freeze taxes without any service cuts at their disposal,” Councillor Scott Fielding (St. James-Brooklands) said after the budget was introduced. “My plan involves the following amendments to the budget that will freeze taxes while investing more money for infrastructure than the city is proposing.”

It’s the third consecutive year property taxes have gone up after a 13 year freeze.

Fielding and Coun. Paula Havixbeck (Charleswood) say they will vote against the budget.

Under the proposed budget, councillors’ ward allowances are being cut by $37,000 after being raised by $40,000 earlier this year.

The city is also cutting 25 positions to save $3.5 million, while implementing that staff take unpaid leave for 3.5 days between Christmas Eve and New Year’s Eve in 2014.

Before the budget can be passed, it needs council approval and has to go through public consultations.