Will Ferrell Paints Winnipeg ‘Burgundy’ at Roar of the Rings 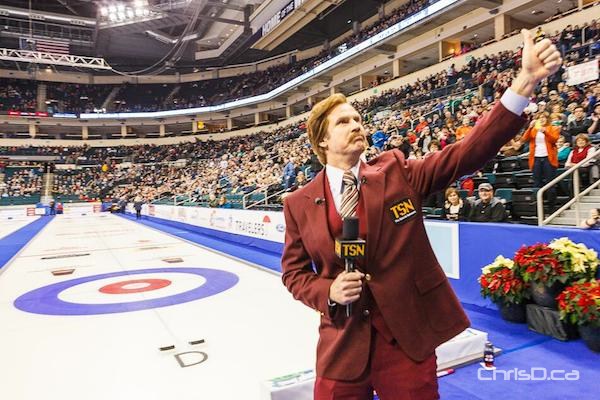 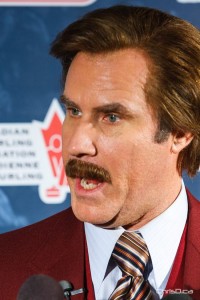 Ron Burgundy speaks with the media on the opening day of the 2013 Tim Hortons Roar of the Rings on Sunday. (SHAWN COATES / CHRISD.CA)

WINNIPEG — To the delight of thousands of Winnipeggers at MTS Centre, comedic actor Will Ferrell brought his Ron Burgundy character to the city Sunday for the opening ceremonies of the 2013 Tim Hortons Roar of the Rings Olympic curling trials.

Mr. Burgundy — sporting a burgundy-coloured blazer that featured a yellow-and-black 1980s TSN logo on the breast pocket — was in town to promote his “Anchorman 2” movie. Fans at MTS Centre clamoured around him for autographs and chanted, “Burgundy, Burgundy” during his time in the arena.

Burgundy began his day at the rink getting curling lessons from the Glenn Howard team. After throwing his first stone to the four-foot ring, Burgundy declared, “That’s a pretty darn good shot.”

Burgundy then met the media in a news conference. The first question he was asked concerned his first impression of the city, to which he replied, “Winnipeg is the Paris of Canada.”

When asked, “What does Winnipeg mean?,” he informed everyone that, “It’s roots are Latin, of course. It means small tundra bunny who lives in the hole in the head.”

After giving the media members “breaking news” that CTV Winnipeg was going out of business, Burgundy declared, “Curling is the future.”

Burgundy then returned to the ice for a pre-tournament interview at ice level. He later joined TSN play-by-play commentator Vic Rauter in the broadcast booth before departing the arena, signing autographs for fans along the way.

The Roar of the Rings event will determine which men’s and women’s teams will represent Canada at the 2014 Olympic Winter Games in Sochi, Russia. It runs from December 1-8.