Home » Sports » Carey Wins, Jones Drops in Draw 5 at Roar of the Rings

Carey Wins, Jones Drops in Draw 5 at Roar of the Rings 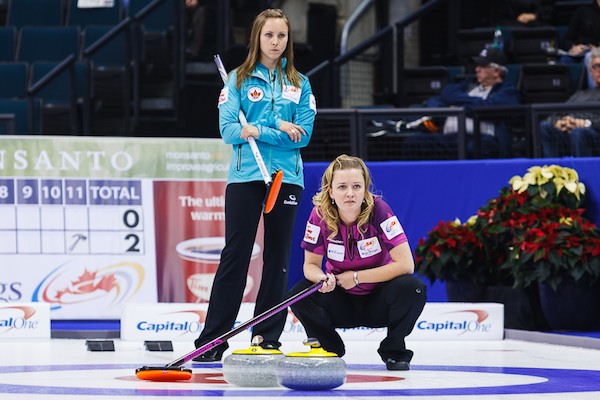 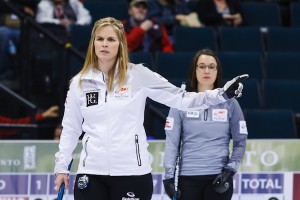 WINNIPEG –- Chelsea Carey of the Fort Rouge Curling Club improved to 2-1 with a 9-8 win Monday night over Rachel Homan in Draw 5 of the 2013 Tim Hortons Roar of the Rings Olympic curling trials at MTS Centre.

Fellow Winnipegger Jennifer Jones dropped to 2-1 after suffering a 9-6 defeat to Val Sweeting, who remains unbeaten at 3-0.

Carey curled well throughout the match but when tied 2-2 in the fourth end, her final shot appeared to pick up some debris on the ice. That miscue allowed Homan to score three for a 5-2 lead.

Carey battled back, however, scoring two in the fifth and two in the eighth before stealing two in the ninth. Homan had a draw to tie the game with her last rock in the 10th but she too fell victim to some on-ice debris, giving Carey the win. Homan is now 1-2 at the trials.

“We said if we could get through this stretch 2-1, it would be really good and even 1-2 wouldn’t have been too bad with these three teams to start– the last three Scotties champions right out of the gate,” Carey said. “We’re getting some breaks when we need them but we’re playing pretty well. We put a ton of pressure on them. It was a great game actually.”

Jones was tied at four in the seventh end and had the end’s final stone, when her shot slipped through the house to give Sweeting a steal of four. A short shot by Jones in the eighth let Sweeting steal a single, at which point the game was all but over. In all, Sweeting’s squad stole seven of their nine points in the match.

“We just missed a couple of bad shots and lost control of the game, that’s going to happen,” Jones said. “We battled back and won one this morning and we kind of let one slip away tonight, but we’ll come back sharper tomorrow.”

In other women’s action, Heather Nedohin improved to 1-2 following a 6-3 win over Sherry Middaugh. Stefanie Lawton is also 1-2 after beating Renee Sonnenberg 7-6.

The men resume play this morning at 8:30 a.m. at MTS Centre.

← Previous: Lady Gaga to Perform in Winnipeg May 22 Next: 'GivingTuesday' a Chance to Give Back →
Tags: Curling | MTS Centre | Winnipeg