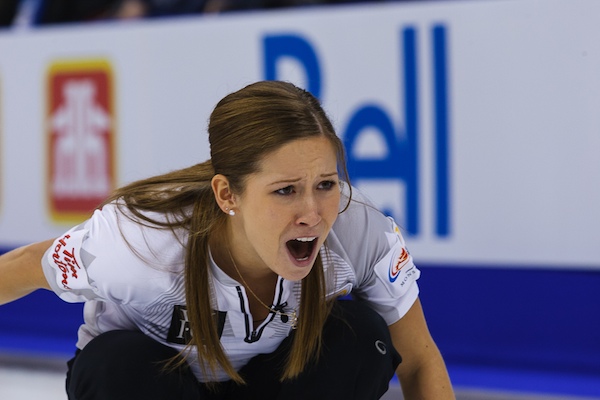 WINNIPEG — The Manitoba men’s teams of Jeff Stoughton and Mike McEwen got their first wins of the 2013 Tim Hortons Roar of the Rings Olympic curling trials Tuesday at MTS Centre. The Manitoba women’s squads of Jennifer Jones and Chelsea Carey split their afternoon matches — Jones with the win and Carey with the loss.

Stoughton (Charleswood CC) edged Toronto’s John Epping 4-3 on a double takeout with his last rock in the 10th end for his first win at the trials.

“It’s nice to get one (a win),” Stoughton joked after the morning draw. “It’s a start anyways. It’s good. We played just as well as we did yesterday. We just got a couple of breaks and we’ll move on to tonight’s game.”

McEwen (Fort Rouge CC) ran Kelowna’s John Morris out of rocks in the 10th end to win 7-5. After a miss by Morris’ teammate Jim Cotter, McEwen made a key draw to the four-foot on his final stone of the eighth end which, after a measurement, gave him three points and a 7-5 lead.

“That’s probably the first time a skip’s missed against us in a key moment in a game,” McEwen said. “Before it was, you know, the other two games, it was us doing that in a tight game.”

“We’re still in this thing,” McEwen said. “Yeah, that (the win) was important. I think you get to that third loss and you might still have a chance, but you definitely don’t control your own destiny. Hopefully we can get one more today and we’ll get back to even ground. 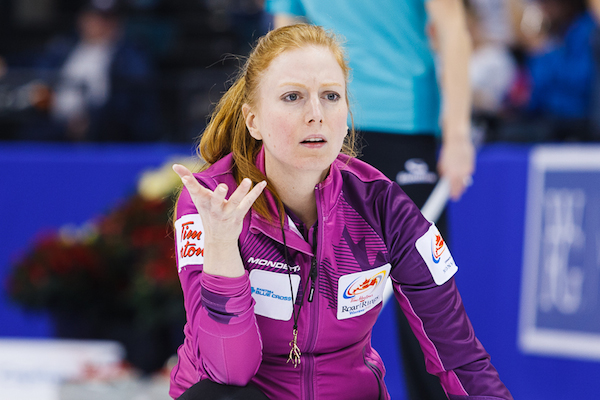 Jennifer Jones (St. Vital CC) was impressive in her 7-2 crushing of Renee Sonnenberg.

Jones stole two points in the first end and then proceeded to steal single points in the second, third and seventh ends en route to the win.

Jones improves to 3-1 while Sonnenberg falls to 1-3.

Chelsea Carey (Fort Rouge CC) lost 7-5 in her tilt with Stefanie Lawton. Carey was leading 3-2 when Lawton dropped a four-spot on her to lead 6-3 after eight. Carey replied with two in the ninth but Lawton countered with a single in the 10th for the win.

“Round robins are amazing,” Carey said. “You can think you know all you want, and you don’t ever. It always changes at the end of the week. We said that all week. We can’t start looking at that stuff, all we get to do is win our games, do our best to win our games and then at the end of it, we’ll take a look at the scoreboard and see if we’re in the playoffs or not.”

The men’s teams are back in action tonight.