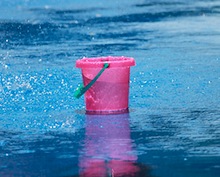 It’s hard to think about splashing around in the water under summer-like conditions this time of year, but that’s what the city was discussing on Wednesday.

“Investing in our recreation facilities is a top priority for the City of Winnipeg,” Katz said. “The new Parks and Recreation Enhancement Program will allow the city to make investments in neighbourhood facilities, such as the spray features at Machray Park, which will provide area families with fun, convenient recreation opportunities for years to come.”

Funding for the project is part of the city’s 2014 preliminary budget, which still needs council approval.