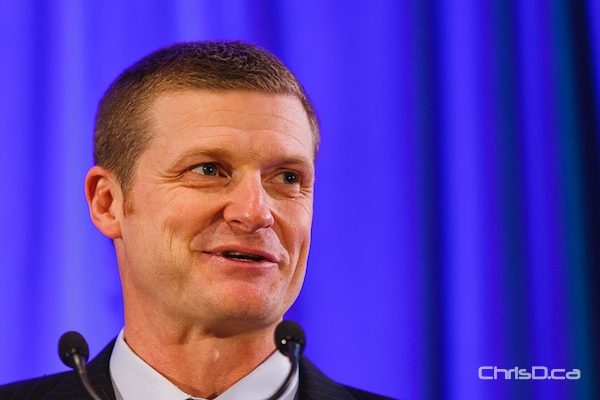 The Winnipeg Blue Bombers have a new head coach at the helm.

Mike O’Shea was named to lead the CFL team on Wednesday after high level speculation in recent days on who the Bombers would choose to replace Tim Burke.

The 43-year-old from North Bay, Ontario comes from the Toronto Argonauts, where he was most recently the special teams coordinator.

“This is truly an honour to take over as head coach for such a historic franchise and one of the landmarks of Canadian football,” O’Shea said. “The organization, our fans, the city and province deserve a winner, and I assure you we will do everything in our power to make all of those people proud.”

A few hundred fans turned out for O’Shea’s public introduction at The Fairmont Winnipeg, including his own son, 13-year-old Mike Jr.

O’Shea played 16 seasons in the CFL for the Hamilton Tiger-Cats and Toronto Argonauts from 1993 to 2008, and retired second all-time in career tackles with 1,154 and is one of only three players to record over 1,000 tackles made.

Former Blue Bomber Khari Jones is still a name in the mix to become the team’s offensive coordinator, and was among the possible choices for the head coach’s position. Jones is currently the quarterbacks coach with the Saskatchewan Roughriders.