McEwen Wins in Tuesday Night Draw at Roar of the Rings 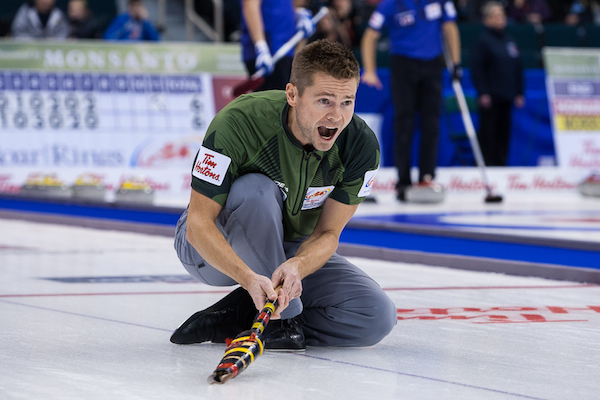 Manitoba curler Mike McEwen yells instructions to his teammates at MTS Centre during the 2013 Tim Hortons Roar of the Rings. (SHAWN COATES / CHRISD.CA)

WINNIPEG — Mike McEwen of the Fort Rouge Curling Club improved to 2-2 win a 10-7 victory over Toronto’s John Epping in Tuesday night action at the 2013 Tim Hortons Roar of the Rings Olympic curling trials.

McEwen entered the ninth end tied 7-7 with Epping but blew the game open with three points in that frame. He then ran Epping out of rocks in the final end to garner the victory.

“We played a great ninth end,” said McEwen about his team’s performance. “It felt like the team was on a mission there. We stepped it up another gear. We looked energized and we were able to kind of get the crowd into it early.”

Jeff Stoughton’s night wasn’t as glorious as McEwen’s, as his Charleswood Curling Club side fell 11-5 to Kelowna’s John Morris.

“We’re disappointed,” Stoughton said in evaluating the game. “We had one rough end where we gave up three. We got caught up on a couple of straight spots where we weren’t expecting the ice to run that straight for a couple of shots and it cost us.”

Thought the loss doesn’t officially eliminate Stoughton, it does make the road ahead a difficult one for his crew.

“We had our fate in our own hands, which is too bad because if we had beaten John, we would have brought everybody down to two losses and then, you’re basically in a playoff spot. You just have to win out,” he said.

Brad Jacobs improved to 4-0 with a 9-4 eight-end win over Kevin Koe. Kevin Martin also goes to 4-0, after beating Glenn Howard 9-7.